Book: A Baby in His In-Tray by Michelle Douglas 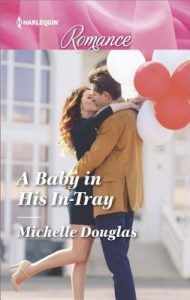 Why it was in my TBR pile: This didn’t sit in my e-reader very long. It’s a March release but I believe I picked it up last month during a sale. (Hint: You can buy the next month’s releases in e-format one month early by shopping on Harlequin’s website.)

Taking care of baby with the boss! When Liv Gilmour’s identical twin sister begs her to take her place for a week to work for business hotshot Lord Sebastian Tyrrell, she can’t say no–after all, the boss will be away. Until someone abandons a baby with a note demanding Sebastian take care of it. Suddenly Sebastian’s swift return sees Liv up close and personal with the sexy boss…and a baby who needs them both!

I love the Romance line from Harlequin. When I want to escape into a feel-good romance, these books fit the bill every time. Low angst, heroes with good intentions and even better behavior, and a heroine I can root for. I started reading them after I picked up Barbara Wallace’s The Man Behind The Mask (highly recommend!) and I’ve been hooked ever since.

I’ll also admit I have a soft spot for twin romance switch-a-roos. Maybe it’s my junior high self who still remembers the Sweet Valley High books with such fondness. (There were quite a few times Jessica and Elizabeth traded places.) Or maybe it’s because I secretly wish I had a twin. No matter the cause, if there is twin mischievousness, I one-click.

Liv Gilmore is in an impossible situation. Her twin got pregnant while on vacation and she needs to find the baby’s father and let him know. Unfortunately, her boss won’t let her have the time off since she just got back from vacation. So Liv, being the wonderful twin that she is, offers to fill in while her sister jots off to find the baby daddy. Her sister’s boss, Sebastian, is going to be on vacation anyway so she’s expecting to have a quiet week of emailing and filing. That all comes to a halt when she arrives back from her lunch break to find a baby on her desk. (Because, of course, she does.) Luckily for her, this baby come with a note. It’s vague and unclear but indicates Sebastian may be the father. Concerned for her sister’s job and confused about the right course of action, Liv calls Sebastian. He convinces her not to call the police and he asks her to take care of the baby, just until he can catch the next flight back to London. She agrees. (Because, again, of course she does!) The truth is, with this set up, I should have been rolling my eyes. Except, I immediately loved Liv. She knows this is crazy. The whole setup is insane and her acknowledgement of that makes her 100% relatable. It’s one of those situations where you know you’re doing something not-so-smart but you are doing it for all the right reasons…and then it blows up in your face. Yeah, I’ve been there.

Lord Sebastian Tyrell immediately knows the baby can’t be his. However, he comes from a rich family with members of questionable backgrounds and he believes the child could be related to him in some way. When he meets Liv, he’s senses something is immediately different about her but chalks it up to their very strange situation. His father has a history of sleeping with his employees and Seb has worked very hard to be nothing like his father. As a result, he has a distant and somewhat cold relationship with his secretary. He doesn’t know where she lives and has never seen her outside of the office. He also knows little about her personal life (including the fact that she has a twin sister). He arrives in London and goes straight to Liv’s apartment. She’s in her PJs and has been up with the baby all night. Seb has also been up all night traveling but his immediate thought is to thank her repeatedly. He also tries to take over where the baby is concerned but has no idea what he’s doing. He could call the police and turn the child over to social services, but he isn’t going to take the easy way out. The baby was left to him. She might very well be related to him and he feels a strong responsibility to take care of her. I liked Seb right from the get-go. He’s had it rough growing up but he’s strong and willing to do things that are hard or don’t come naturally to him.

Liv offers to help him take care of the baby until they can find the mother. Seb agrees. A friendship forms that deepens into something more. Each of them has wounds and responsibilities that play out over the course of the book and, by the end, I was rooting for them to get together. The twin switch lie hovers over them throughout the course of the book, but Liv handles it with believability. Honestly, I felt bad for her. There’s nothing particularly earth-shattering or shocking about this book yet the characters are so warm and lovely, I didn’t care. It was exactly what I was in the mood for. If you haven’t read this one, I would highly recommend it.